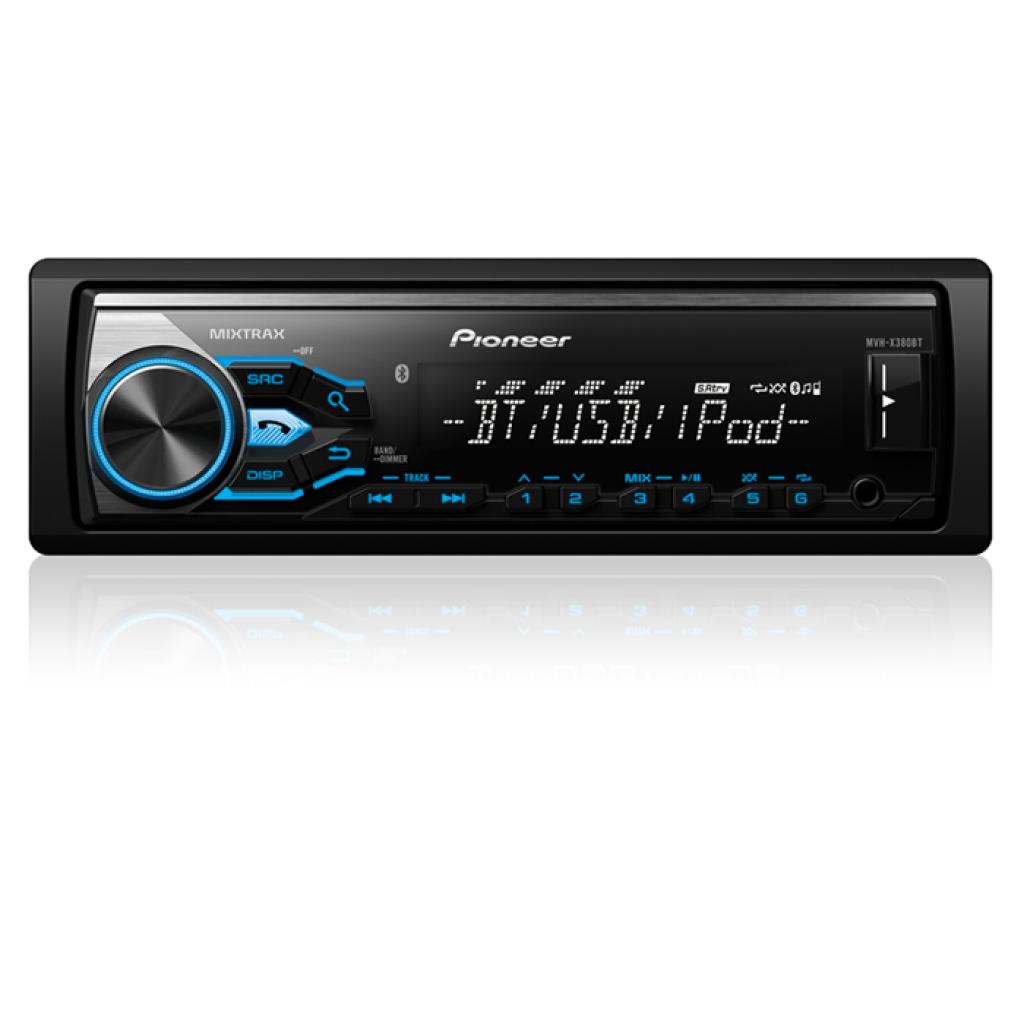 The MVH-X380BT Digital Media Receiver was specifically created to work with your smartphone and digital lifestyle. Featuring Pioneer's MIXTRAX technology, built-in Bluetooth for hands-free calling and audio streaming, USB direct control of an iPod or iPhone, USB access to music on Android devices (4.0 or later), and Pandora for both iPhone and Android, the MVH-X380BT is packed with features that will keep you entertained and safely connected. The CD-free design allows your smartphone and digital media to take center stage.

AOA 2.0 enables Android owners to play music streaming apps and control basic functionally, Play/Pause and Skip Song, using the buttons of the receiver. The new feature requires the Android device to be running Android 4.1 or newer and be plugged into the receiver via the USB connection on the front of the unit.

The new cosmetics feature a sleeker, more open and accessible display, offering a larger display with more metadata to be shown on the face of the receivers. Pioneer increased accessibility of control functionality, shifting the master control knob to the left side of the DEH-X2800UI, DEH-X4800BT, and MVH-X380BT models and illuminating the presets and track up and track down buttons of the DEH-X6800BT, DEH-X5800HD, DEH-X3800S and DEH-X3800UI.

The receiver also includes the USB Auto Switch feature so when the phone is connected via USB the listener has the option to choose whether the receiver uses the phone as a source, or just charges the device.

Keep the party going with MIXTRAX, an innovative Pioneer technology that creates a nonstop mix of your music library complete with a range of DJ-inspired effects. Drawing from Pioneer′s rich DJ heritage and our passion for music, MIXTRAX delivers a unique DJ infused listening experience to those in the car. MIXTRAX takes the music from an iPhone, iPod, USB device, or certain Android devices and plays it back with added transitions and effects, creating a virtual DJ inside the Pioneer receiver.

MIXTRAX also features Club-Style Illumination that enhances the mood with a dynamic dance club-like lighting effect. As MIXTRAX begins, lights start pulsing to the beat of the music, adding an extra level of entertainment. Choose among multiple patterns of lighting variations from sound pressure level or low-pass synchronization modes.

Automatically connect two phones when in the vehicle to make and receive calls and stream music from both phones.

Other features include the ability to browse music libraries on smartphones wirelessly. In addition, iPhone Bluetooth pairing via USB allows the user to connect an iPhone via an appropriate USB cable and it will be paired simply. This feature is great where there are multiple devices active and you are trying to search for and connect to a certain device.

This model also has “Guest Mode” which allows a user to add and replace a third mobile device instantly to the receiver. Guest Mode is a great feature for a family vehicle with multiple drivers or a driver with multiple devices because it allows users to pair and delete devices easily without a lengthy registration or deletion process.

The 2015 line of Pioneer digital media receivers with Bluetooth wireless technology have the ability to utilize the voice recognition engine that is part of the operating system on a user′s smartphone. This feature is compatible with iOS devices that have voice recognition capability.

iPhone 4s or later users can take advantage of Siri Eyes Free functionality with a touch of a button. When activated, Siri voice prompts play through the vehicle′s speakers and the user′s commands and questions are received and transmitted to the receiver using the external microphone. Siri Eyes Free provides access to many iPhone functions such as music selection; making phone calls; and listening to text message, calendar information, and reminders.

Pandora is personalized internet radio that is designed to help you discover new music that you'll love mixed in with music that you already know. With the MVH-X380BT, you can enjoy superior sound quality and full control of the Pandora experience in your car directly from the touchscreen display of the receiver. You are able to give tracks thumbs up or thumbs down, bookmark a song so you can purchase it later, easily switch between your personalized radio stations, and view full track data.

In-dash control for Pandora is compatible with iOS and Android devices. Simply download and open the free Pandora Radio app to your smartphone and connect it to the MVH-X380BT and take your music to the next level. iOS devices require a wired connection using the CD-IU51 USB interface cable for 30-pin models (sold separately) or CD-IU52 USB interface cable for Lightning models (sold separately). Android devices need to be paired to the receiver via Bluetooth while the Pandora app is running.

Connect an iPod or iPhone to the MVH-X380BT using the optional CD-IU51 interface cable for 30-pin models (sold separately) or CD-IU52 USB interface cable for Lightning models (sold separately) and enjoy the music stored on your device. Song, artist, time and album information are displayed on the LCD display. The Link Play feature helps you find content faster and the system's wired USB connection provides direct digital signal transfer from the device for clean, clear sound while providing 1 amp of current to keep your iPod/iPhone charged.

Through Media App Control, you can play and control music from various music apps such as iHeartRadio® and Aupeo™. Play, pause, next and back commands, if enabled by the connected app, are available on the receivers when used with an iPhone (via USB connection) or Android (via Bluetooth) devices*.

*App functions and features may vary based on app provider. Cellular data charges may apply. Android compatibility only offered with Bluetooth enabled Pioneer models. Not all Android devices are compatible.

With App Mode you can enjoy listening and viewing the content on select compatible apps directly on the receiver's display from a connected iPhone or iPod Touch. Limited controls such as track forward or reverse may be executed from the receiver.
Note: Not all apps will be compatible with App Mode and App Mode will provide limited, if any, control over the app.

Users of Android devices running operating system 4.0 or later can connect and listen to music stored on their device to a compatible Pioneer CD receiver without the need for an app. The process is made possible using Media Transfer Protocol (MTP). MTP allows the Pioneer receiver to recognize the Android smartphone as a music storage device. Users can now access music via USB stored on an Android device and operate basic operations like FF, REW, Play, Pause, Random Play, and Repeat. Metadata information such as track, artist, and album name can be displayed.