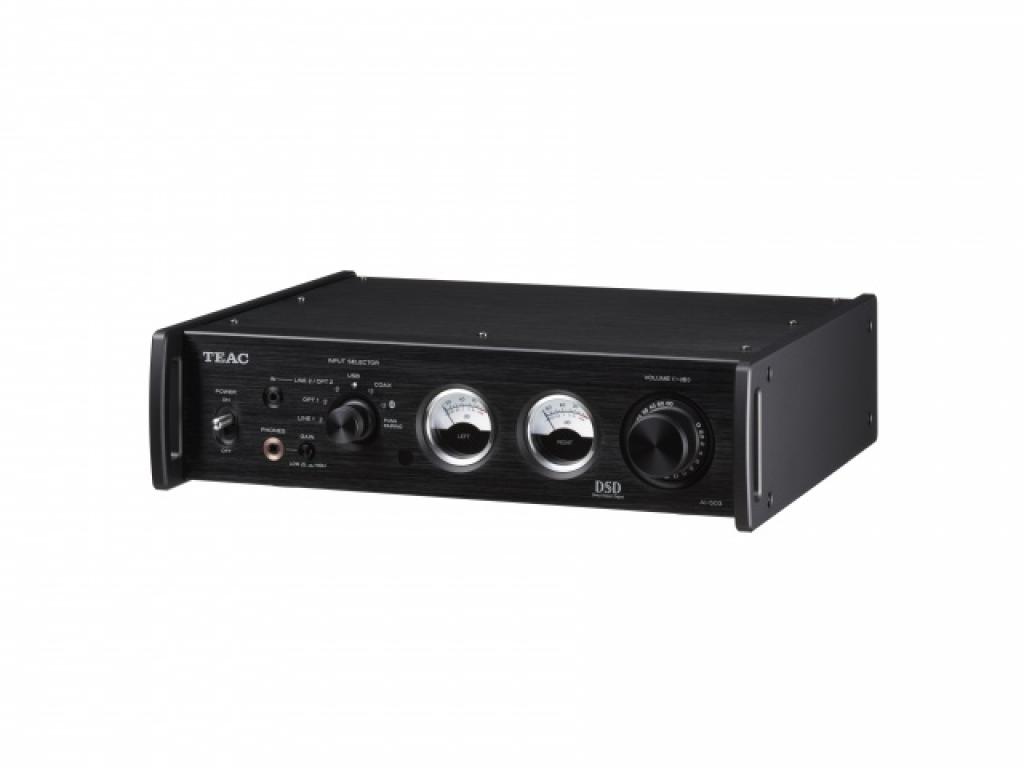 The AI-503 is an integrated amp and USB DAC that supports inputs up to 11.2MHz DSD and 384kHz/32-bit PCM. The DAC/preamp, which is the heart of the unit, follows the same design concept of our UD-503 and adopts a dual-mono circuit design that is fully balanced. Separate VERITA AK4490 D/A converters - made by Asahi Kasei Microdevices Corporation - are used for the left and right channels. In addition to a USB digital input (for Windows/Mac computers), optical/coaxial digital input and RCA analog input, we have also enabled high-resolution wireless audio listening by including a LDAC-compatible Bluetooth® receiver. Furthermore, with a combined 3.5mm optical digital/stereo mini jack on the front panel, the unit supports wired, as well as wireless, input from DAPs.

The power amplifier uses a Class-D power amplifier (made by ICEpower a/s) that guarantees high resolution during the playback of delicate signals as well as high linearity at high volumes. This unit can power both compact bookshelf speakers (for desktop applications) and large floorstanding speakers. The pre-amp section uses a fully-balanced TEAC-QVCS high-precision volume control circuit with a 4-circuit construction. By maintaining detail levels at all resolutions, the AI-503 creates a very realistic soundstage, along with a high signal-to-noise ratio and excellent sense of space. By connecting an external power amplifier to the fitted pre-out jacks, you can upgrade performance and create an even more capable audio system. The headphone amp section uses a discrete TEAC-HCLD circuit, with a push-pull arrangement, allowing it to drive even high-impedance headphones with ease. The two-stage High/Low gain switch enables optimal volume setting for everything from low-impedance in-ear monitors to high-impedance (600Ω) on-ear headphones. Furthermore, the inclusion of a 3.5mm headphone jack, one that supports a 4-pole separate ground connection, allows excellent channel separation, even when using balanced-type headphones or earphones.

Filter types include 4 PCM and an ‘off′ mode , as well as 2 DSD digital filters. You can use the remote control to set the optimal filter, according to the input file format and type of music. You can also change the filter during music playback so that you can fine-tune the audio quality.

Note: When receiving signals at 352.8 kHz or 384 kHz, the digital filter will be disabled during playback regardless of this setting.

In order to deliver high-quality audio performance, we have incorporated a well-regarded, high-output power amplifier made by ICEpower a/s. This guarantees high-resolution playback of delicate signals as well as excellent linearity at higher output levels. The use of a compact, high-efficiency Class-D power amplifier enables the inclusion of a dual-mono circuit configuration in the DACs (highly beneficial to digital audio) while retaining a small, stylish form-factor.

ICEpower® is a registered trademark of Bang & Olufsen ICEpower a/s.

Providing a visual indicator of system gain, analog level meters are built into the front of the unit. These meters provide a stylish insight into operating levels of the system and feature a dimmer function which can be set to one of four levels (bright, normal, dim, off), allowing you to adjust the brightness to match the lighting of the room, you can also turn off the operation of the level meters completely.

The dedicated headphone amp employs Class AB operation, as well as a discrete push-pull circuit and op amp. We have applied all the expertise we gained during the development of the UD-503 to give this model a circuit design that suppresses noise while maintaining the wide operational range of a Class-A amplifier. The fine details and nuances of your music, as captured in high-resolution audio, are delivered in a natural dimensional manner

Note: Earphones and headphones with 3-pole plugs can also be used, but to benefit from separate left/right ground drive, you should use earphones or headphones with 4-pole plugs. Pin assignments are as shown in the illustration below:

In addition, the headphone amp output features a 2-stage gain-switching function which enables optimal volume setting when listening through anything from low-impedance in-ear monitors to high-impedance 600Ω headphones.

We pay great attention to each and every control, including an aluminum volume knob with firm torque and toggle switches that provide a sense of satisfying certainty in operation. The dedicated remote controller, which is topped with aluminum alloy, exudes class. We also focused on the operation of the unit itself and so the remote control can be used to adjust volume in steps as small as 0.5 dB.

The USB input supports resolutions up to 11.2MHz DSD and 384kHz/32-bit PCM. In addtiopn, “DSD native playback” (in which DSD is converted directly to analog without first being converted to PCM) is also supported. On the software side, TEAC HR Audio Player, a free music playback software specifically written for TEAC products, supports ASIO 2.1 and DoP (DSD over PCM) formats, allowing native playback of 11.2MHz DSD audio sources on Windows as well as Mac computers. And finally, optical and coaxial digital inputs support resolutions up to 192kHz/24-bit.

The onboard Bluetooth® receiver supports LDAC* and aptXTM as well as AAC and other wireless transmission of high-quality audio, enabling easy audio streaming from your smartphone or tablet.

*LDAC is an audio coding technology developed by Sony that enables the transmission of High-Resolution (Hi-Res) Audio content, even over a Bluetooth connection. Unlike other Bluetooth compatible coding technologies such as SBC, it operates without any down-conversion of the Hi-Res Audio content1, and allows approximately three times more data2than those other technologies to be transmitted over a Bluetooth wireless network with unprecedented sound quality, by means of efficient coding and optimized packetization.

The front digital input jack is a convenient way of connecting digital audio players with optical digital and analog outputs. With these connections, music already on your portable device may be enjoyed through speakers or headphones, taking advantage of the audio processing power available within the AI-503

Note: When using this unit with a Windows computer, you must install the dedicated driver on that computer before connecting the AI-503 via USB.